I just finished making a quilt for my Aunt Thelma (Actually my cousin Thelma once removed, but who can say that every time?). She asked me to make it for her from blocks sewn by her mother Edith many years ago. Some of the blocks were made from dresses Aunt Thelma wore as a child and that was over 75 years ago. (I promised I wouldn’t give Aunt Thelma’s exact age!) The age and the memories are part of the wonderful oldness of the quilt. 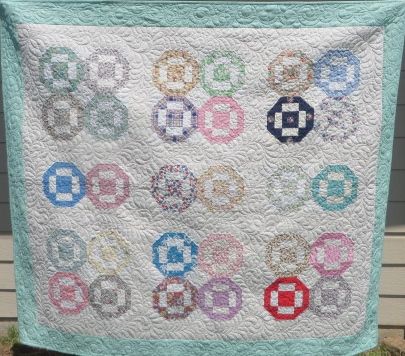 The newness is found in the construction, the backing (which only looks old), the muslin used for the sashing and the gingham border. All these were used, of course, to add to the old look of the whole quilt. Are you confused yet?

I couldn’t find the pattern name listed anywhere. It’s possible Miss Edith made it up herself or it was a local favorite. I did find a similar pattern called Rolling Stone, which certainly seems to fit. It is however, a very old pattern, which I just adore. 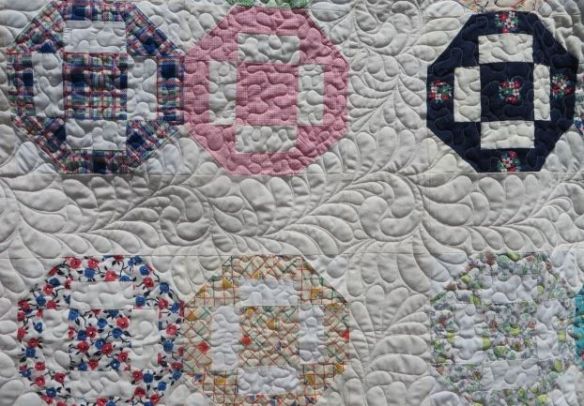 The quilting stitch is also an old familiar style called Feathering. It gives the quilt a charm and age that is so appropriate.

The quilt is going with me to California in May to be given to Aunt Thelma. She will be so surprised! She has no idea it is done and ready to be loved and adored, just like her dresses were so many years ago.