It happened at 6:30 pm to be specific. Again it could have been anytime but I remember it well and it was definitely 6:30 pm on a Monday.

What am I talking about? Mac’s first band concert, of course.

It seems Mac has decided to play the tuba this year – 6th grade. (Can you believe it? Wasn’t he in kindergarten just last year?)

There were tryouts at the beginning of the year on many different instruments. Mac blew into the tuba mouthpiece and the director announced he was “a natural”. My interpretation– “We are short of tuba players and you look pretty good.” 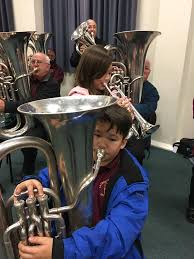 Anyway, Mac now believes he was born to play tuba, which is a good thing. He is in the beginning band, a very good thing. And they had their first concert last Monday night . . . . . at 6:30 pm, a very, very good thing.

The evening started out with Gramps and me arriving at the school and coming in to the auditorium through the back door. All the kids were nicely seated in the audience section and no parents were anywhere to be seen. Suddenly Mac stood up and said to us, “You can’t be here!” What ever happened to “Hello Granny”?

We smiled and waved to him. “Hi, Mac.” Again, “You can’t be here!” He’s very big on rules and regulations lately.

I’m not sure to this day what we were not supposed to see but obligingly we went to the hallway and there were all the other families waiting patiently.

Finally we were allowed back into the auditorium and all the kids were by then on stage in their performance seats. Of course, we could not see Mac. He was one of the four tubas in the back row. 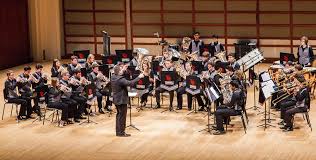 The concert was great with lots of Christmas music. All the instruments were featured throughout the evening including the four tubas in the back row.

The time passed too quickly and before we knew it we were hugging Mac back out in the hall. “Congratulations” and “Good Job” were heard from everyone. Mac was beaming.

How special for him to have both parents and both sets of grandparents hugging him and telling him how great he did. Even his great uncle, a musician, made an appearance and was very impressed.