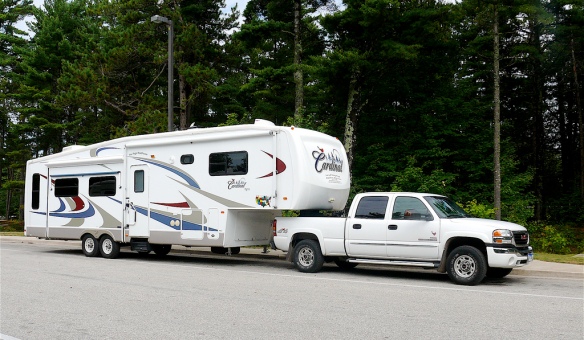 Gramps and I have owned our RV for about nine years. In that time we have taken many trips — to the mountains, to the seashore, to forests, to deserts, through most of the US actually. We have spent wonderful weekends with friends, vacations with siblings, and overnight adventures with children. Seven-year-olds have been thrilled to sleep on a table that turns into a bed. Heck, Gramps and I have traveled to places from our past, dared to go out in uncharted areas for a bit of adventure and excitement and even had a few romantic trysts all by ourselves in the aluminum nest.

We had enjoyed most every kind of camping a person could imagine, until this summer. This time we ventured into the seldom-seen and less-often-done realm of camping with teenage boys!!! Yes, we invited two grandsons ages 15 and 17 to go with us to Chicago and then to the Experimental Aircraft Association’s famous Airventure in Oshkosh, Wisconsin.

It seemed like a great idea and we made tourist plans we thought would keep them busy and interested for the week. We figured out the sleeping arrangements in the RV and planned meals for the four of us We calculated the weather and clothing needs and got plenty of cash from the bank. We were set and ready for a great trip.

The first surprise was the size of the two boys. We had not seen them in a year and as teenagers are wont to do, the grew! Really, they grew! They were big boys! Possibly the sleeping arrangements would have to be rearranged.

We picked them up at O’Hare Airport after their first plane ride. They were excited, humbled, thrilled and hungry. Hunger, I was soon to learn, was a daily- no – an hourly issue for teen boys. It’s not actually possible to fill two growing boys up at one sitting and so they get hungry again in about two hours. This happens all day, every day. Possibly the meals plans would have to be rearranged.

Boys between the ages of 12 and 19 spend all their free time connected to some sort of electronic device. Since we have no TV in the RV and don’t allow much hand-held “game” playing, we had planned a full schedule of fun sightseeing in Chicago and at the Airshow. We were unaware that if it doesn’t explode, crash, catch on fire or scare the peewatom out of you, boys of that age are not interested. Possibly the sightseeing schedule would have to be rearranged.

We brought enough cash for the trip and then some. No need to pinch pennies. Have a good time, get some souvenirs, do some unusual things but still have plenty of reserve for emergencies and the like. However, two fast-growing boys who have never flown before come with no shampoo, no shaving gel, no deodorant, no soap, socks with holes and only one T-shirt and one pair of undershorts each. So shopping it is. Possibly the budget plans would have to be rearranged.

The only things we didn’t underestimate were the fun and enjoyment we had spending seven days with two fine grandsons. We had all the laughter, good talks, teaching and sharing time we could have ever hoped for. All four of us came away with a closer relationship, a better understanding of each person’s character and much more appreciation of each one’s humor.

We already loved each other, but we learned to like each other and appreciate our differences. And that needs no rearrangement.

What is a Village Granny?

A granny is, by definition, an elder, a grandame. She has hard-won life experience, wisdom and endurance to pass on to others. She is part of a family, a team, a village, that works together to raise the next generation -- a most worthy and daunting vocation. To be called a Village Granny can sometimes feel like being one lone person in the world. But to a child, you can be the WHOLE world.

Who is the Village Granny?

Granny is my name, and spoiling is my game. I’m 71 years old and have been married for 50 years, with 2 grown children: daughter, married and son, single. I have one grandson, 13 years old, who lives nearby, and Gramps and I see him often. I have 5 other grandchildren, ages 23 to 10 years old, who are the children of my niece and her hubby. They live out of state and we see them twice a year. I love being a Granny and feel that everything in my life has prepared me for this “job.” It’s a job I take very seriously, with a good sense of humor.

What tickles your fancy today?