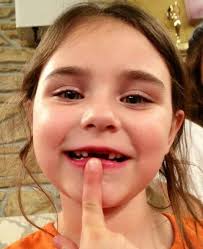 My three youngest grandchildren are in the throes of losing their baby teeth. I made Tooth Fairy pillows for the two 7 year old boys – “Sheriff Tooth” and “Police Officer Tooth”.  I have not, however, made a pillow for 6 year old Mary and she just lost her first tooth. I am a baaaaad Granny! Guess what I’ll be doing this week? Of course – making a “Princess Tooth” pillow, what else!

The one grandson, Shawn, has very religiously put

every newly extracted tooth in the pillow and anxiously waited for the Tooth Fairy to exchange it for the agreed upon amount – I think it’s now $1. (Used to be a quarter!) He has then spent his earnings on whatever he wanted at the time. He thinks he has a gold mine in his mouth!

The other grandson, Mac, has saved every tooth he has lost (I think the number is about eight now) and has refused to give them up to anyone, let alone a Tooth Fairy. Yes, he knows he can get money for them. Yes, he knows more teeth are coming in. No, he will not change his mind. He’s not even sure why he wants to save them, except to say they are his and he wants them.

This is the same child that wants everything to stay as it is, doesn’t want the weekend (or any fun time) to end and hates saying goodbye to anyone, even if he will see them again the next day. He doesn’t much like change of any sort. He cried when we moved, talks about the old house and wants to visit the horses from the old neighborhood. When my daughter bought a car without telling him ahead of time, he had to go by the dealership to say goodbye to the old car. To say he is a miniature hoarder is an understatement. He saves EVERYTHING!

Should we be worried? I don’t think so. All kids save things of one sort or another. I think it’s just a way for little people to have a bit of control in a really big world. It’s reassuring and comforting, even though it can get a bit messy and cluttered. Besides, it’s self limiting – he only has a finite number of baby teeth and they are pretty small.

So for now Mac is keeping his teeth in a box in his room and we all think it is very charming and sweet. What he will do with them in the future, no one knows – not even Mac.

What is a Village Granny?

A granny is, by definition, an elder, a grandame. She has hard-won life experience, wisdom and endurance to pass on to others. She is part of a family, a team, a village, that works together to raise the next generation -- a most worthy and daunting vocation. To be called a Village Granny can sometimes feel like being one lone person in the world. But to a child, you can be the WHOLE world.

Who is the Village Granny?

Granny is my name, and spoiling is my game. I’m 74 years old and have been married for 53 years, with 2 grown children: daughter, married and son, single. I have one grandson, 16 years old, who lives nearby, and Gramps and I see him often. I have 5 other grandchildren, ages 26 to 14 years old, who are the children of my niece and her hubby. They live out of state and we see them twice a year. I love being a Granny and feel that everything in my life has prepared me for this “job.” It’s a job I take very seriously, with a good sense of humor.

What tickles your fancy today?